Home now and working on updating the blog.

There are many folks to thank, especially my riding partner, Ian Johnson and the folks who made this happen: Steve Bailey of Vespa Motorsport, Allen Drysdale of Corazzo Gear and Murray Walters of Scooter Central.  My thanks and love to you all.
Posted by Scooter Wanderlust at 8:59 PM 5 comments:

Another quick update (which is about all there's time for these days):

Good news - We're safely in Canberra and staying with friends of Ian.

Bad news -  The scooter gods are still messing with Ian's Gilera.  This time it was (and kind of still is) the water pump.  Repairs were made in Moe and we're hoping it holds until Sydney.  But the bearing noise is worse today.  There's been talk about sacrificing a goat.  Hope it doesn't come to that.  Will keep you posted.

The current plan it to head to Sydney on Thursday.  Will post again from there.
Posted by Scooter Wanderlust at 4:27 AM 1 comment:

It's Saturday, 15 September and time for another quick update.

Ian and I have been the guests of Gary and his family who live just outside Melbourne.  They are gracious, generous and all-around awesome hosts.  It's not just the home-cooked meals and comfortable beds.  They've really made us feel welcome.

The plan is to head toward Canberra and then on to Sydney.  If all goes well, the "Lap around Australia" should complete by Thursday or Friday.
Posted by Scooter Wanderlust at 6:05 AM No comments:

We arrived safely in Ceduna and expect to be in Adelaide by Tuesday.  The good news is the weather is much improved from the rain, hail and gale-force wind of a few days ago.  The bad news is the scooter gods are still picking on Ian.  A large piece of hail bounced onto his right rear-view mirror and broke it.  (He bought a replacement in Bunbury.)  His scooter tipped over in the sand/gravel at the campground, denting his exhaust and scratching up the same mirror housing.  One saddlebag, as well as the contents (small blanket, travel umbrella and silk glove liners) were melted beyond salvation by the hot exhaust pipe.  (We're feeling lucky that this did not start a fire!)  And then, just to add insult to injury, the replacement mirror fell off and broke.

As for me and the X7, we're getting along just fine (knock on wood!).

Internet connections have been spotty but I will post updates and photos.  (I know, I know.  I've said it before.  But I really will.  Eventually.)
Posted by Scooter Wanderlust at 3:33 AM 1 comment:

Well, another day and no blog updates to speak of.  Sorry.

Just a quick note about today:
Both bikes were serviced today at the awesome Piaggio / Vespa dealer in Perth, Ace Scooters.  Steve, Rukhsana and Bill are all rock stars!!  BIG thanks to them all for getting us in for service, feeding us Timtams and coffee and tea, making us laugh and making us feel right at home.

Weather took a turn last night and it's been stormy pretty much all day.  We're going put in a few miles today, but taking it easy due to wet roads and my new rear tire.

Today is Saturday, 01 Sept and everything is fine - just spotty or no connectivity.  Have an appt. for service at Ace Scooters in Perth Monday morning.  Will post blog updates then.  Thanks to all for messages of support!
Posted by Scooter Wanderlust at 8:54 PM No comments:

Ian was up early and nearly packed when I got up.  I’d packed the night before so, at last, I was pretty much ready when he was.  Except we had no place to go.  said we could leave our things until we knew for sure if we were departing or staying another night.  Mail should arrive within a couple of hours.  If we’re very lucky, the belt can be installed quickly and we’ll be on our way by noon.  Feels like I’ve said that before.

Ian tracked the packages of belts sent by Allen to a truck in Katherine.  He’s off to the post office to get more specific information.  Meanwhile, took the paintings I like out of the shed again.  He also gave me his card so I could give him all my money later (and he’d send them to me).

The fellows at the bike shop said the mail gets delivered by 11.  Ian went to see if the package arrived.  Nothing yet.  Nor at noon, nor 1:30, nor 2:30.  After several visits to the post office by Ian and the bike shop guys (It is here yet? How about now?) there were no belts.  And no real answers from the post office.  The “overnight mail” was in the hands of a private courier and they had no control over (or knowledge of) his schedule.  Frustrating!!  Finally, Ian’s phone rang at 3pm.  The shop has the belts. YAY!

This is a photo of a cast crocodile outside the sporting goods shop next to the repair shop.  It’s the pic of the day (mostly because it’s the only one). 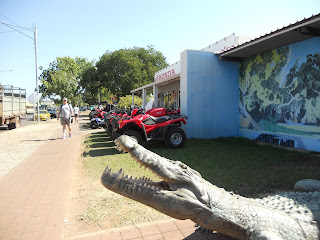 Ian wanted to watch the mechanic do the installation but they would not permit it.  Well, that sure doesn’t engender confidence.  I tried to distract Ian by offering to buy lunch.  I hoped it would keep his mind off the scooter and get us a much needed meal.

We picked up a couple of sliced pork sandwiches at Bucking Bull.  They had actually closed but the ladies inside took pity on us and let us in.  We ate on the lawn adjacent to the shop.  Even though they completed the belt installation by 4, it was too late for us to ride north.  We agreed to spend one more night in Katherine and set out on Saturday morning.
Posted by Scooter Wanderlust at 7:51 PM 1 comment: